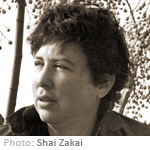 Daniella Carmi was born in Tel Aviv. She studied philosophy and communications at the Hebrew University of Jerusalem and writes drama, screenplays and books for adults and children. She has published five books for adults and eight books for children and youth. Her young adult book, Samir and Yonatan, was awarded an Honorable Mention from UNESCO for Children's and Young People's Literature in the Service of Tolerance (1997), the Berlin Prize for Best Children's Book in Translation (1997), the Silver Quill Award (Germany, 1997), the Batchelder Award for Best Translated Book by the American Library Association (2001), and the Italian WIZO Prize (2003). Carmi has also received the ACUM Prize (2002) and the Prime Minister's Prize (2010), and has been nominated for the Astrid Lindgren Prize. In 2007, her story A Lady Hippopotamus on the Roof was performed at the Haifa Children's Theater Festival. Most recently, Carmi has been nominated for the Astrid Lindgren Prize. Her books have been translated into fifteen languages.