Avigdor of the Apes 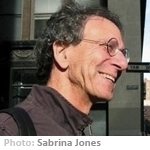 Avigdor of the Apes

By Steve Stern
“What ails you now, that you have gone up entirely to the roofs?”—the Zohar

or UPNE.
Steve Stern was born and raised in Memphis, Tennessee. He has published a number of novels, novellas, and story collections, including The Wedding Jester, which won the National Jewish Book Award. He's been the recipient of grants from the Fulbright and Guggenheim foundations and teaches creative writing at Skidmore College in upstate New York. His latest novel is The Frozen Rabbi.