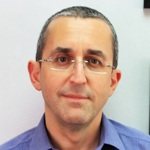 Translated from Hebrew by Jeffrey Green

This story was first published by Even Hoshen in Hebrew in 2010, as part of a collection of stories entitled Say You Remember.

Zvi Aviner Vapni was born in Israel in 1963 and grew up in Jerusalem. He received Bachelor and Master degrees from the Hebrew University in Jerusalem and taught history at the Open University. In 1991 he joined the Ministry of Foreign Affairs and during the next two decades was posted to Sofia (Bulgaria), Atlanta, and Los Angeles in the U.S. In 2000 he became the Ambassador of Israel to the Philippines, where he spent four years. Vapni published short stories in Israeli literary periodicals including Keshet Ha'Khadasha, Masmerim, and Shvo. He published his first book in 2010: a collection of short stories in Hebrew, called Say You Remember. He is married with two children.

Jeffrey Green (the translator) has been translating from Hebrew to English since 1979.