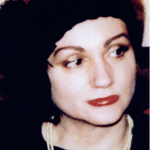 Translated from Croatian by Iskra Pavlović