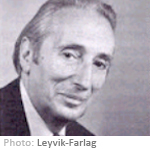 Abke the Chewer’s troubles began when he tried to do a good deed. He got himself into trouble and was thrown into prison. Not just for a summer, a winter, and then out, but for a good long time.