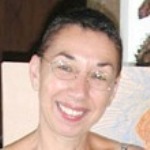 It’s hard to remember a time before Yolanda. She helped my mother in the house and sometimes helped my father at the office. “Your father’s not like a Jewish man,” Yolanda said. What did she think real Jewish men were like? Did they have horns? Perhaps she couldn’t imagine a real Jewish man arousing desire.

One day, for no particular reason, I glanced towards the kitchen and saw my father groping Yolanda’s breasts. Her eyes were shut, her body curved against him. Just then, he lifted his head and our glances locked. My life until that moment flashed before me, opening then quickly withering like time-lapse flowers.
I fled to my room and threw myself onto the bed. Except for an occasional shudder, I lay still. When I could move, I dragged myself to the kitchen. My father sat there, wreathed in harsh-smelling smoke. He didn’t look up. “You know I love your mother,” he said to the table. I just nodded. Even then, I knew I wouldn’t tell. Silence wove a conspiracy between us. I was only fourteen and I needed my unshattered world.
We’d arrived from Europe when I was very small. My parents survived the war and tried to live as if everything of value lay before them. But my mother yearned for the youth she was meant to have, carefree years that suffering had snatched away. She resented me as if I were her jailer, firmly planted in front of the door to freedom.
My father stood there too. Once, when they were screaming at one another, I burst into frantic sobs. My mother glared as if she hated me. Shrieking, “I’m a person too,” she rushed from the house. I scrambled after her, but she was gone. Forever, I thought, my chest aching with loss. But a few hours later, I heard her defeated footsteps on the stairs. When she opened the door, I flung myself into her arms, buried my face in the plush synthetic fur of her jacket, icy cold from the winter air.
My parents fought constantly. My father was impractical, a dreamer. One day, tempted by its beauty, he bought a gold watch from a refugee instead of buying food. “You’re selfish,” my mother spat. “You stupid, lousy thing,” shouted my father. Each knew for certain the other was ruining his life. In our tiny flat, one bedroom and a kitchen, it was hard to be private, to escape.
After fights, my father would go to a local coffee house to smoke and watch TV and dream big dreams. My mother found refuge at the movies.
I slipped out to my girlfriend Gina’s house. She had a wire-haired terrier named Frizzy, and I hoped, when Frizzy had puppies, I could have one. Sometimes I just walked to the local park. Inside a clump of trees, there was a small, grassy space where I would lie, concealed from everyone. When I thought the storm was over, I started home. By then, feeling anxious, I even hurried. My fear gave our rooms a seductive glow, oases of warm light in a dark wall.
In time, my father realized some of his ambitions. My mother’s fur was real. We lived in a spacious, elegant house. And Yolanda came.
Yolanda was Polish, a peasant woman who’d run away from her violent husband. Her hair was fine and fair, her body ripe. But her face was gaunt, her eyes full of unwanted knowledge. She cleaned well and cooked delicacies my father remembered from childhood. Our cat, Bubble, would sleep on her bed in the afternoons, curled in a patch of sunlight.
Yolanda was kind. When I moped about after some disappointment, my mother would accuse me of being difficult, of spoiling her mood. But Yolanda would ask, in her grave and gentle way, “Dina, why are you sad?” She sewed me clothes, something I’d begged my mother to learn, but she never had. When I dressed up for a date, Yolanda told me how beautiful I looked and stroked my hair, careful not to muss it. I felt sure that as soon as Yolanda knew what I’d discovered, affectionately, remorsefully, she would end it. I loved Yolanda. I didn’t want to lose her.
A few weeks after the revelation, my father took Yolanda to the office. It was late December and they were counting stock, an enormous job. By nine o’clock that night, they hadn’t returned. Worried, my mother called, but no one answered. Finally, hours later, they burst through the door. Yolanda pulled the kerchief from her hair. It tumbled to her shoulders in blond tangles. Her cheeks were very pink. My father began to bluster about deadlines. Ignoring me, he lit a cigarette. The deep groove between his eyes grew even deeper, as it always did when he hoped to deflect questions, to stir pity. Now it looked as painful as a wound.
Helplessly, I began to turn away, but Yolanda came to me. She touched my cheek and implored in a low voice, “Dina, why are you sad?”
The rage came out of nowhere, sweeping me with it. Eyes burning, I pushed Yolanda, hard. “Go,” I screamed, “go.” Yolanda stared at me, then began to weep. My heart glowed with pain and exultation. My parents looked horrified. Mother’s mouth was a perfect o. Father’s lips were stretched tight as if sewn together. “Liars,” I roared.
Copyright © Eva Eliav 2012
Eva Eliav grew up in Toronto, Canada and now lives in Israel. Her poetry and short fiction have been published in a number of literary magazines, including Room of One’s Own, Emrys Journal, Natural Bridge, Flashquake, The Apple Valley Review, Horizon Review, The Linnet’s Wings and ARC Israel. Her work also appears in Tel Aviv Stories, an anthology of English writing in Israel. She was a winner in the Glimmer Train June 2009 “Best Start” competition and received an honorable mention in the Glimmer Train winter 2011 very short story competition. Her other interests include painting, films, and finding the perfect frappuccino. Eva Eliav is married and has a daughter.