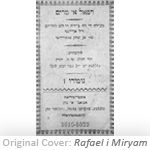 Translated from Ladino by Michael Alpert