The Plot Against the Giant 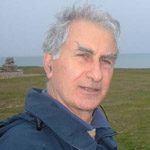 The Plot Against the Giant
By Gabriel Josipovici
The summons went out at noon. We assembled under ‘the daisy’. In every kitchen pages of ‘the manual’ peeled from the walls. Upon inspection it was found that our ‘equipment’ was in order and we were ready for ‘action’. Well-trained, well-equipped, well-led, we were aching for ‘the big day’.
We marched ‘by company’, in single file, through the ‘forest’, always keeping close to the base of the ‘mountain’, and converging at last on the ‘clearing’ where the giant lay sleeping.
Without a word, for we all knew what had to be done, we deployed our ‘ropes’ and ‘pegs’. One company was assigned ‘the head’, another ‘the shoulders’, and so on down. Ours was assigned the left foot and ankle. The giant breathed deeply and steadily, his chest rising and falling like a mountain high above us. The air, as we set to, was heavy with his breath.
The work proceeded apace. Some of us were ‘detached’ and ordered to climb onto his chest, hauling up ‘the ropes’, and then to throw them down to those waiting on the other side; some to light fires in order to weld the ‘manacles’; some to sharpen the ‘pegs’; some to man the ‘field-kitchen’.
We worked for as long as it took. There was no question of rest or respite. As soon as it was done we ‘reformed’, and ‘presented arms’. A great feeling of relief spread through us. No longer in thrall to the giant, no longer driven by unassuageable desires, impossible dreams and fantasies, we would at last be free to be ourselves. Already the celebrations were being planned. The ‘mothers’ hung out the bunting, while the ‘carpenters’ made the ‘wheels’. In the trees ‘lanterns’ lay hidden, waiting for the world to come to life. In the municipal kitchens the ‘fowl’ were being prepared for roasting, the ‘fish’ for frying, and, out of the cellars where they had, throughout the years of our servitude, been kept cool, the ‘puddings’ were being taken.
But then, abruptly, the giant cleared his throat. He ceased to breathe his deep regular breaths. The air grew quiet. All of us still working on him were immediately ordered off. He opened wide his eyes and tried to move, but found that he could not. Our hearts were in our mouths. The giant turned his head to one side and then to the other. We who were on his left side saw his left eye, open wide, considering us. Then, very slowly, he stood up, shaking off his shackles. And a feeling of such relief flooded through us, as though we had all of us been waiting for him to do just that, as though the plot against him and its execution had been nothing but a charade, a ritual to which we no longer had the key. There we were again, ‘in thrall’ to the giant, and our relief, I would even say our happiness, was palpable to all.
Copyright © Gabriel Josipovici by kind permission of Carcanet Press Ltd.
This story is from Heart's Wings, by Gabriel Josipovici. This book will appear in October 2010 and can be purchased online through Carcanet Press.
Gabriel Josipovici was born in France in 1940 of Russo-Italian, Romano-Levantine parents. He lived in Egypt from 1945 to 1956, when he moved to England. After studies at Oxford he joined the School of European Studies of the newly-established University of Sussex, from which he retired in 1998 as Professor of English. He is the author of 14 novels, 3 volumes of short stories, six critical books, including The Book of God: A Response to the Bible (Yale, 1987), and numerous stage and radio plays. His most recent books are Only Joking (a novel), Heart’s Wings (stories), and What Ever Happened To Modernism? (a critical study) (all 2010).