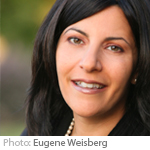 Canadian Gila Green is a writer, editor, and EFL teacher. As the daughter of a Yemenite-Israeli father and an Ashkenazi-Canadian mother, she often writes about the immigrant experience including dislocation, alienation, and racism. She is the author of Passport Control (S&H Publishing), White Zion (Cervena Barva Press, 2019) and King of the Class (NON Publishing, 2013). Please visit: www.gilagreenwrites.com