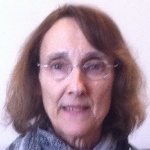 Gail Benick is a writer living in Toronto. She teaches at Sheridan College in the field of Diaspora literature and memoir. Her recent publications include essays on the practice of digital storytelling in higher education.