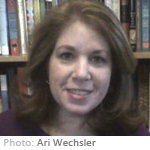 Susan Kleinman’s short stories have appeared in The Baltimore Review, Inkwell, Troika and The William and Mary Review, and her articles, essays and book reviews have been published in The Forward, Gourmet, The Jerusalem Report, Metropolitan Home, Redbook, New York, The New York Times, and dozens of other publications in the U.S. and abroad. Ms. Kleinman was a Gurfein Fellow at Sarah Lawrence College, and has taught writing workshops for middle-school and high-school students and adults. She lives in Westchester County, New York, with her husband and their children.