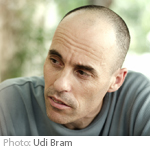 I touch now his despair