The Historical Cabaret of Professor Fabrikant 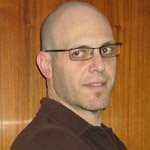