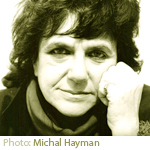 Translated from Hebrew by Barbara Harshav