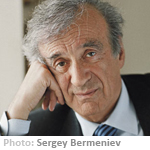 and also for purchase at Random House.
Elie Wiesel is the author of more than fifty books, both fiction and nonfiction. He is a recipient of the United States Congressional Gold Medal, the Presidential Medal of Freedom, the French Legion of Honor’s Grand-Croix, an honorary knighthood of the British Empire, and, in 1986, the Nobel Peace Prize. Since 1976, he has been the Andrew W. Mellon Professor in the Humanities at Boston University.