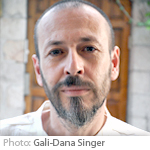 Translated from Hebrew by the author with Gabriel Levin