Tale Two (From 'Three from Once') 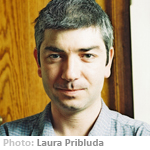