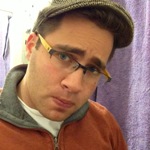 “You’ve got a good kop. Shirah always said you were at the top of your high school class.”
“She’s exaggerating.” Most of my high school was spent smoking pot in the playground of a nearby elementary school. I has been a third-rate student at a third-rate yeshiva and barely managed to pass any of my Jewish classes. The lone “A” from the nearsighted Rabbi Mermelstein, whose tests I had gotten from a senior, were the exception that proved the rule. My sister designated me a lost promised child with Mermelstein’s crooked scarlet A stitched to my chest. It was simpler that way for her, I supposed, than just facing up to my being average and unremarkable.
“And humble too, a talmid chochum the bricklayer.”

“I could be the Vilna Gaon. It’s a dirty job, someone’s gotta do it.”
The Vilna Gaon was a legendary sage revered for his wisdom and his uncompromising stance on everything. In his last years he had excommunicated all the Chasidim. His brief blistering commentary on the Talmud was still studied and puzzled over by advanced yeshiva students everywhere. I had recognized him in my brother-in-law’s collection of the saintly dead: a pencil drawing with a long white beard and sad eyes that feared God.
The tufts of hair fell, first blonde, brown before my eyes and then black on the linoleum tiles. Afterwards they would be swept up and thrown into the overflowing garbage bin. I asked my brother-in-law how the Giants were doing. He was a life-long fan; I heard from my mother how he’d sneak late into my parents’ house without telling my sister, to catch the final minutes of Monday Night Football.
“What does a poshut yid know about goyish things like football?” he asked.
I arched my back and laughed.
“No doing so well, then?”
“Shmos think you almost win a Superbowl, you can clown around for the next two seasons. Beaten by the Vikings. The Vikings! When was the last time the Vikings actually completed a pass? But with the Giants, forty-nine points! Brett Favre—what is he, like 120?”
I laughed again. My brother-in-law spent his days trying to erase the traces of who he was, from his old friends to the healed piercing marks in his ears and face. He was a born-again Jew from Brighton Beach who had found peace in an old religion. He had even gone to Juvie for beating a man so bad he spent the rest of his life in a wheelchair. One Shabbat, after a few too many l'chaims of J & B, I asked him what the man had done. “Enough,” my brother-in-law told me. My brother-in-law towered over my sister, as large as his simple faith.
“You know Rabbi Mendel Lifshitz was a lifelong Mets fans. He threw a kiddush when they won the World Series because for the first time, he didn’t care.”
“Why?”
“To care about these things is okay. We’re not like the tzadikim who could fast from Sunday to Friday, who could absolve themselves of the world so easily,” my brother-in-law mulled, trying like he always did to impart some sort of moral lesson to me. “We’re human, but it’s better not to care about these mundane things. It's better to live for higher things.”
“Besides, God surely does love the Patriots,” I quipped.
My brother-in-law ignored me as he dipped into esoteric philosophy and the Talmudic disputes he spent his days embroiled in—the texts I could no longer understand and the meaningless battles that he fought against himself. His life was a spiritual war between the yetzer hora and the yetzer tov, the evil inclination and the good one. The more he erased of himself, the better he became. I was too smart for all that, and dumb enough to be almost pleased with myself—my life was the simple, bristly physical here-and-now. While he spoke, I glanced at the rim of the sink and saw the signs of a messy hurried life: children’s toothbrushes with teardrop green globs on their bristles, a plastic washing cup for my nephews to wash negel vaser, and a faded Dora the Explorer sticker, a trace of the forbidden outside that had squirreled itself in.
“Peyot?” my brother-in-law asked.
“At the bone,” I answered.
Sideburns at the bone was a requirement of Jewish law. My brother-in-law’s peyot swayed as he swayed in prayer, swaying like his forefathers did in the wilds of Galitzia, while they chopped wood with their ears twitching for the sound of hooves signaling the Cossacks’ imminent arrival. I too, in my sister's apartment, was a slave to the all-encompassing laws.
The phone rang in the hallway and my brother-in-law went to get it.
“It was my shvig,” he said moments later, using the Yiddish term for mother-in-law.
“What she want?”

“No,” I said. “We can go with whoever we want.”
On their way back, my nephew lightly touched my knee as if to say he wanted to ride the eagle with me whenever the Messiah did arrive.
“It looks good,” my brother-in-law said as he came back into the bathroom.
“Yeah,” I said. “Yosef, you do a good job.”
He brushed off the clippers in the sink and separated the different sizes of clippers into a box.
“I do. I should have become a barber. Einstein once said that nuclear power changed everything except the way we think. He said: ‘Had I known that, I would have become a watchmaker.’”
My brother-in-law placed a hand on my shoulder and then removed it, blowing away the stray hairs that attached to his hand. I put on my sweatpants and sweatshirt.
“Send my regards to Shira,” I told him.
My brother-in-law held my chin in one hand and looked from side to side.
“Looks even,” he pronounced. “Make sure you say goodnight to the boys on your
way out, and lock up. You should call her.”
I walked to my nephews’ room and opened the door a crack. There, crowded in the small room, were my three beautiful nephews, their eyes closed with the sleep of the righteous, their faces only illuminated by an outside streetlight. Soon they would grow old and sin. I blew them each a kiss from my tainted lips and closed the door, careful not to wake them.
“Don’t forget this,” Yosef called out softly to me as I walked out. In his hand was the small black yarmulke. I shoved it in my pocket.
I lingered for a moment and watched as Yosef walked back to the dining room and sat by the table under the steady gaze of the sages. I left the apartment, a dybbuk who took the elevator down to vanish into the paralyzing darkness from which I emerged.
Copyright © Michael Orbach 2013
Michael Orbach is a writer living in New York. He is the former editor-in-chief of The Jewish Star newspaper and his work has appeared in The Jewish Week, Forward, Tablet Magazine, and a host of other Jewish periodicals. “Free Haircuts” is part of a series of short stories in his unpublished collection, The Last Jews of Long Island.