Frieda Metzger at the Wall 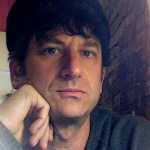 Frieda Metzger at the Wall

Larry N. Mayer, the son of Polish Holocaust survivors, grew up in the Bronx, NY. His first book, Who Will Say Kaddish?: A Search for Jewish Identity in Contemporary Poland, was published by Syracuse University Press in 2002. A graduate of Columbia University’s Teachers College, he has worked with at-risk high school students for over fifteen years, and wrote about his experiences for the Boston Phoenix in 2000, “Consider Yourself Educated.” His short story, “Love for Miss Dottie,” was selected for publication, by Mary Gaitskill, in the Best New American Voices 2009 anthology. His latest nonfiction work, “The Love Option,” (as yet unpublished) describes his most recent experience as a teacher in a Boston area Yeshiva. Mr. Mayer, who writes both fiction and nonfiction, has an MFA in Creative Writing (Fiction) from the University of Idaho, a degree he earned in 2009. His latest nonfiction work, “From Sir With Compassion: The Misadventures of a Secular Teacher in an Orthodox School,” appeared in the Jewish Daily Forward this October. This story is dedicated to the author’s father, Edmund M. Mayer.