When Pari Was A Bride 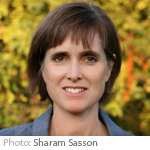 When Pari Was A Bride

Susan Sasson is at work on a novel, inspired by the stories of her husband’s Mizrachi community. They share universal Jewish experiences and values, retaining a sense of humor and love of life despite hardship. Born in England and raised in California, the author holds an MFA in Creative Writing from St. Mary’s College of California, as well as public policy and English degrees from UC Berkeley and UCLA respectively. A companion piece to the story above appeared in jweekly.com.