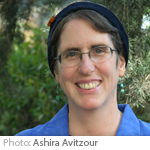 Sara (Susan) Avitzour was born in 1955 in Brooklyn. She moved to Israel in 1980 and settled in Jerusalem, where she and her husband raised seven children. She worked as a lawyer, mediator, grant-writer, and translator before returning to school in 2005 to study clinical social work. She currently practices as a psychotherapist. Sara’s memoir, And Twice the Marrow of Her Bones, chronicles her daughter Timora’s struggle to lead a normal life as she battled leukemia, and her own journey first with, then without her daughter after Timora died at the age of eighteen. She has also published stories online and in Israel Short Stories, an anthology of short fiction in English by writers living in Israel.