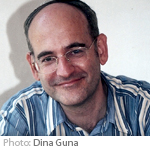 Translated from Hebrew by Ira Moskowitz