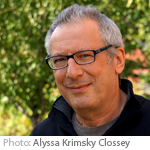 
Jonathan Wilson’s work has appeared in The New Yorker, Esquire, The New York Times Magazine and Best American Short Stories, among other publications. In 1994 he received a John Simon Guggenheim Fellowship. His fiction has been translated into many languages including Dutch, Hebrew, Italian, Polish, Portuguese, Russian, Chinese and Uyghur. Wilson is the author of eight books: the novels The Hiding Room (Viking 1994), runner up for the JQ Wingate Prize, and A Palestine Affair (Pantheon 2003), a New York Times Notable Book of the Year, Barnes and Noble Discovery finalist and runner up for the 2004 National Jewish Book Award; two collections of short stories, Schoom (Penguin 1993) and An Ambulance is on the Way: Stories of Men in Trouble (Pantheon 2004); two critical works on the fiction of Saul Bellow; a biography, Marc Chagall (Nextbook/Schocken 2007), runner-up for the 2007 National Jewish Book Award and Kick and Run, a memoir. Wilson lives in Newton, Massachusetts. He is Fletcher Professor of Rhetoric and Debate, Professor of English and Director of the Center for the Humanities at Tufts University.