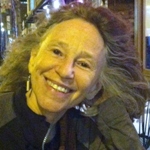 Melissa sat beside Richard in the raised back row, transfixed by what seemed to her the drama at the bima. She felt akin to the boy, brave or innocent enough to question his own scripture. She had been unfamiliar with Korach’s crime and punishment, but now she too felt for the man who was sent to hell. Sheol: it sounded bad. Like smothery, soiled velvet hangings and human screams in the corridors. Unfairness had always disturbed her. If she were less greedy she’d be working with the Innocence Project. Even on an antidepressant, when she read about one more exonerated Death Row inmate she got a lump in her throat.

The lump was back now; she tried to swallow it. She hadn’t liked the rabbi, the something unctuous and self-impressed in his speaking voice, but she forgave him for being pleased with Nathan. The room filled with the rabbi’s chanting and the congregation’s responses. Rows of people stood, recited, sat back down. Richard’s arm brushed against hers. Down the row a woman coughed, and coughed again, trying to stifle it. Melissa squeezed her eyes shut. But she was crying and couldn’t stop, loud heaving sobs, inappropriate, insane. What did she want that she mustn’t ask for? How would she be punished? Her husband loved her; her agreeable job paid well. In her purse was a card with a check for a ridiculously large sum with Nathan’s name on it. Still she felt like the uninvited guest to the princess’s birth, the thirteenth fairy who ate her festive meal on silver instead of gold and whose gift was death.

It was a good thing they were seated in back. Swallowing her sounds as well as she could, she pushed past Richard and out through the padded doors and found her way to the street, which greeted her in a burst of humid heat. After her five-block run she unlocked the car and threw her body across the back seat, sobbing as loud as she wanted out of sight and hearing till her throat was raw, her dress and the upholstery damp with sweat and tears. Every time she took breath a new sob would emerge, submerged at times by the grinding rumble of the El train. There was no stopping any of it.

Minutes later Richard opened the car door. He squeezed in beside her and stroked her back, her hair. He murmured words of love. Eventually she sat up. “I know,” he said. “That was exquisitely painful.”

She wanted to sock him. Pound his chest with her fists. “I want . . .” she said. “I need . . .” Then, shameless, “Make me a baby, Richard.”
She was still weeping, but not so violently that she failed to register the brief gap in his breath.
He kissed the side of her head. “You’re my baby,” he said. “And I’m yours.”
He had never talked like this before, in the words of rock and roll. It was infuriating.
“Let’s talk about it tomorrow,” he said. “When we’ve had time to reflect.”
“No! Say you will! You’ll try! Say it now!”
He tried to guide her back toward the light of reason. He brought up her issues—abandonment!—things she had told him in the first months of their getting to know each other, that she thought he’d forgotten, that she wanted him to have forgotten. “It’s about your dad, right? You’re testing me.”
“That is just”—she was ready to scream—“psychobabble!”
“Look,” he said calmly, “at what our friends went through. And are still going through. Could you stand that?”
Yes! she said to herself, but it felt like bravado. I’m not a coward! She suppressed that, too. “I don’t know. I’m willing to risk it, I guess. Let’s be brave together.”
“Melissa,” he said, “I don’t understand you.”
“I know that!” No tears, she said to herself. Do not.
He huffed a sigh, poor Richard, enraged and impotent. He was done arguing. Then from on high there came an augmenting rumble, a kind of explosion that shook the car and their bodies, breaking up the pretense of order, blasting away will and reason and even the capacity for thought. It was probably the train on the track overhead, approaching, passing, but Melissa felt the earth splitting open. They were falling, she and Richard, tumbling down to a place she hoped wasn’t Sheol.
Copyright © Sharon Solwitz 2014

Sharon Solwitz has had stories in magazines including Tri-Quarterly, Ploughshares and Mademoiselle; their awards include the Pushcart, the Nelson Algren and the Katherine Ann Porter. She has published a novel, Bloody Mary, and a story collection, Blood and Milk, with Sarabande, Inc. Her collection received the Carl Sandberg award and the Midland Authors prize, and was a finalist for the National Jewish Book Award. A story from her novel-in-progress appears in Best American Short Stories 2012. She teaches fiction at Purdue University in W. Lafayette, Indiana.