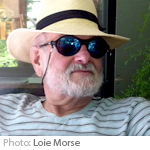 My mother yells from the front seat.

Andrew Potok, once a painter, turned to writing in his middle years. His first book, Ordinary Daylight, received national acclaim and was followed by a novel, My Life with Goya, and then a scholarly look into the fascinating world of disability, A Matter of Dignity. He lives in Vermont with his wife, Loie, and his guide dog, Gabriel.