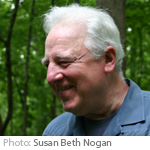 Copyright © Bill Teitelbaum 2014
Bill Teitelbaum’s plays and short fiction have appeared in journals such as Bayou, Oregon Literary Review, Montreal Review, and Rhino, in anthologies such as Western Michigan University’s Art of the One-Act, and most recently in 2 Bridges Review, Audition Art, Milo Review, and Great Weather for Media’s 2014 anthology. His current projects include a cycle of short plays called Kings, about the imperial legacies of Saul, David and Solomon, and a collection of short stories called Are You Seeing Anyone?