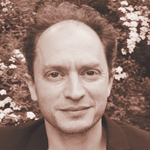 Translated from French by Kathryn Gabinet-Kroo

“Since what?”
“Uh, well, did she have a relationship… someone in her life?”
“No, I don’t think so.”
Ben-Ami raised his head, frowned, then looked back down at his notebook and began nervously turning its pages. He watched Daniel from the corner of his eye. “Does the name Ibrahim Awad mean anything to you?”
“No, should it?”
“He was seen with Sara shortly before she disappeared.”
“Who… who is he?”
“It seems that he and Sara are very close. Several of her friends mentioned his name. His family hasn’t heard from him either. We’re trying to find out more.”
Daniel’s face, which until then had masked his anguish, suddenly froze, revealing that behind the bewilderment was an undeniable fear. His formerly placid voice now gave rise to an imperious and hostile accusation. “But… just exactly what do you know? Even so, it’s… Someone must have seen Sara… You don’t just disappear like that, from one day to the next―”
“Listen, Mr. Benzaken, we’re doing everything in our power to find your daughter. We’ve questioned her professors, her friends, her classmates, everyone who knows her. We checked the contents of her computer and retraced all the calls from her cell phone and at this very moment, an all-points bulletin is circulating in every police station in the country. For now, there’s no point wasting energy on speculations.”
The telephone rang. Detective Ben-Ami turned back to his desk to answer it. Daniel caught a glimpse of a schoolyard through the open window behind the police officer. The cries of the children at recess rose up in a melodious brouhaha, like the languorous thrum of instruments being tuned before a concert. Daniel again gave in to fatigue – it took no more than a moment of distraction – and voilà, the memories came flooding back, submerging him, carrying him away on their capricious tides. The bell has just rung; he is waiting for Sara outside the schoolyard. She doesn’t run to him or jump into his arms, not in front of her schoolmates. But once seated in the back seat of the car, she raises her face to him and, placing a coquettish index finger on her cheek, she demands a kiss. It is the beginning of summer vacation and Daniel is transported back to Saint Adolphe d’Howard and the shores of Lac Vingt-Sous where, a few metres from their chalet, he and Leila had planted a lilac to celebrate Sara’s birth. Then suddenly, another memory: back in Montreal, Sara is sitting under the porch of their house on Édouard-Montpetit. She invites Daniel to join her and, with a bunch of lilacs in her hand, she shows him how to detach the flowers to suck out their nectar.
But his impatient spirit prevented him from savouring the scene. Quickly, another image emerged from an even more distant past: close-up on baby Sara. In her bath, she laughs and splashes Daniel. In response to each provocation, he invents a new name for her that she repeats without understanding, and he splashes her with renewed vigour: Saradio, Saravenous, Saratatouille, Saravioli, Saravishing… Daniel pulled himself together. No, he had to stop this immediately. The slippery slope of memories was too dangerous. Especially now.
The detective finished his phone call. He got up and stepped toward Daniel with his hand extended. “Trust me, we’re doing everything we can to find your daughter,” he repeated. “And obviously, if you hear anything…” Daniel let himself be guided out, thanked the policeman and went down the long corridor leading to the exit. The office door that closed behind him, the receptionist who gave him a compassionate look, the taxi driver who insisted on putting his suitcase in the trunk himself: it all seemed like a conspiracy to remind him that his life was now in suspense. He appeared to others, and even to himself, as no more than that: a man whose daughter has disappeared, a man who is worried, a man who waits.
This excerpt from Paths of Desire is © Exile Editions, 2014, translated by Kathryn Gabinet-Kroo. For this English version, Exile Editions is happy to acknowledge the financial collaboration with the Department of Canadian Heritage, through the National Translation Program for Book Publishing.
Emmanuel Kattan, born in Montreal, is the author of three novels, Nous seuls,  Les Lignes de désir and Le Portrait de la reine. He studied in Oxford as a Rhodes Scholar and is a graduate of the University of Montreal and the École des Hautes Études en Sciences Sociales in Paris. Emmanuel currently heads the British Council’s New York Office and was previously Head of Communications at the U.N. Alliance of Civilizations. He lives in New York with his wife and two sons.