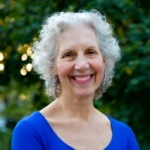 Because she tasted funny.

Joan Leegant is the author of a novel, Wherever You Go, named by the Union for Reform Judaism as one of its ‘Significant Jewish Books’, and a story collection, An Hour in Paradise, winner of the PEN/New England Book Award and the Edward Lewis Wallant Award, finalist for the National Jewish Book Award and a Barnes & Noble Discover Great New Writers selection. From 2007 to 2013, Joan was the visiting writer at Bar-Ilan University where she taught in the master’s program in creative writing. While in Israel, she also lectured on American literature and culture under the auspices of the U.S. State Department. Formerly an attorney, Joan began writing fiction at age forty. Currently she lives in Seattle where she is the writer-in-residence at Hugo House.