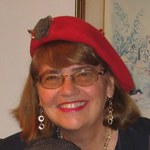 Dr. Susan Lowinger is a clinical child psychologist who works with developmentally-disabled children and their families. Dr. Lowinger is the editor of three non-fiction books about the diagnosis and treatment of autistic children. She grew up in New York City, later moving to Israel, where she enjoys exploring the ancient land with her husband and children. Presently, she is working on a collection of fiction stories about the meaningful and often unusual experience of life in Israel.