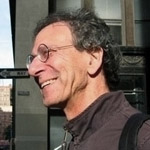 Copyright © Steve Stern 2014. This excerpt is from his forthcoming book, The Pinch, which will be published by Graywolf in June, 2015.

Steve Stern is the author of a number of novels and story collections, including most recently The Frozen Rabbi and The Book of Mischief.  He's the recipient of the Edward Lewis Wallant Award for Jewish American fiction and the National Jewish Book Award, and has received fellowships from the Fulbright and Guggenheim foundations.  His stories have been included in the Pushcart and O.Henry Prize anthologies, and three of his books were cited as New York Times Notables.  He's a writer-in-residence at Skidmore College.