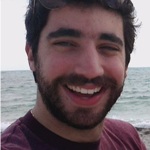 Zachary C. Solomon is a Miami-born, Brooklyn-based writer, and current Fiction MFA candidate at Brooklyn College. You can find him at zacharycsolomon.wordpress.com or on Twitter @z_solomon.