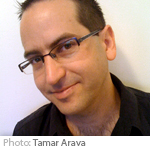 Translated from Hebrew by Anati Bloch

Ofir Oz is an author and a blogger from Israel. He wrote his first story in 1983 when he was six years old, in Hebrew uppercase letters he had recently learned in school. His novel, The First Name, met with critical acclaim and popular success. The First Name is told as a series of short stories, which interconnect and intertwine to become a picaresque novel. The first story, “Criminal,” won the Steimatzky award for Best Short Story of the Year, and is now available on Amazon. “Oscar” is the second story in this book.