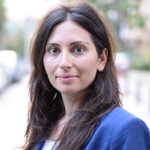 Nathalie Alyon is the Associate Editor of the Journal of Levantine Studies published by the Van Leer Jerusalem Institute. She received her B.A. from Brown University and recently completed an MA at Bar Ilan University’s Creative Writing program. Her fiction and non-fiction have appeared in Poetica Magazine, Quaderns de la Mediterrània, JUF News, Zeek, and Ha’aretz. Nathalie blogs on intercultural living and travel at packthestory.com. Born in Israel to Turkish parents, Nathalie grew up in Istanbul, matured in the United States, and currently resides in Tel Aviv, Israel.