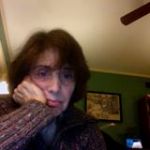 Abby Rosenthal was born in Brooklyn, grew up in Queens and on Long Island, and lived in upstate New York, California, Oklahoma, Washington DC, and Wyoming before settling in Tennessee. In other words, she’s a wandering New Yorker. She has an MFA from Cornell University, and her poems and stories have appeared in Alaska Quarterly Review, Carolina Quarterly, Chicago Review, Kansas Quarterly, Southern Poetry Review, Weber, and Revolver. She is also the author of Ardor’s Hut, a book of poetry. She and her husband, poet Thomas Johnson, currently reside in Memphis.