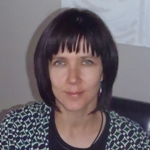 Maria Bloshteyn was born in Leningrad and immigrated to Toronto, Canada at the age of 8. She is a scholar of comparative literature and culture, with a special interest in Dostoevsky’s reception in America. She is also a much anthologized literary translator. Roza Naumovna’s Recipes is a collection of short stories, inspired by the life and work of her grandmother, a professional chef. Maria hastens to add that her grandmother, unlike the fictional Roza Naumovna, was a sweet and gentle soul, who made Maria’s childhood not only happy but gastronomically delightful.