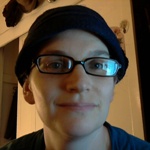 Rebecca Klempner is a wife, mother, and writer born in Baltimore, Maryland. Originally trained as an anthropologist, she spent six years teaching before becoming a stay-at-home mom. She now writes at a little desk in the corner of her bedroom in Los Angeles, California, while the kids are at school. Dozens of her short stories have appeared in Haredi magazines, most notably Hamodia, and you can find her personal essays online in Tablet and in print in Binah and Ami. Rebecca has additionally published one picture book, A Dozen Daisies for Raizy.