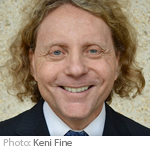 Copyright © Thane Rosenbaum 2015. “Gimpel of Surfside” is an excerpt from the forthcoming novel, How Sweet It Is!, to be published in April 2015 by Mandel Vilar Press.

Thane Rosenbaum is a novelist, essayist and law professor, the author of numerous books of fiction and nonfiction including The Golems of Gotham, Second Hand Smoke and, most recently, How Sweet It Is!, where “Gimpel of Surfside” appears. He appears frequently in such publications as the New York Times, Wall Street Journal, Washington Post, Haaretz, Huffington Post, and the Daily Beast, among other national publications. He hosts The Talk Show at the 92nd Street Y. He is a Senior Fellow at New York University School of Law, where he directs the Forum on Law, Culture & Society. www.thanerosenbaum.com