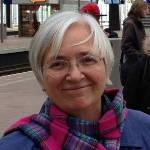 Mary Dingee Fillmore’s novel, An Address in Amsterdam, is the result of thirteen years of research and obsession with the Holocaust and resistance in the Netherlands, and what we can learn from them today. This story is a novel excerpt. Mary’s website and blog, http://seehiddenamsterdam.com/, provide an evolving collage of Amsterdam places to explore, as well as a glimpse of the fast-fading history of the Nazi Occupation. Mary earned her M.F.A. at Vermont College in 2005. Her poetry has since appeared in such journals as Atlanta Review, Upstreet, Pearl, Diner, Westview, and Main Street Rag.