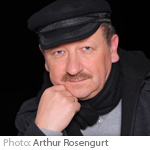 Translated from Yiddish by Barnett Zumoff

Boris Sandler was born in 1950 in Belz (Bessarabia). In 1975 he graduated from the Music Conservatory in Kishenev. He played violin in the Moldovan Symphony Orchestra. In 1983 he received the highest degree in literature from the Literary Institute in Moscow. Sandler is the author of fourteen books of fiction and poetry. His works have been translated into Russian, English, French, German, Hebrew and Romanian. Sandler was also a recipient of a number of prestigious Israeli literary awards. For his book Red Shoes for Rachel, he received the J. I. Segal Prize from the Jewish Public Library of Montreal in 2010 and the same award in 2014 for his novel Hidden Saints I Recall. Since April 1998 he is Editor-in-Chief of the Yiddish Forverts.