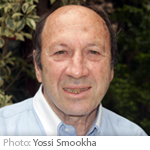 Copyright © Yitzhak Gormezano Goren 2015. This is an excerpt from the novel, Alexandrian Summer, which was published by New Vessel Press in May 2015.