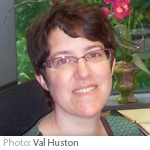 She brushed the top of the loaf with beaten egg, and then, on an impulse, she pulled a bit of dough from it, just in case someone or something would receive it. This is Louise, she thought as she enclosed the lump of dough in her hand, I give you Louise. Only keep her from falling too far and too hard and too often, and let her come back to me sometime. She smoothed the loaf where the bit of dough had been removed as well as she could, and put it in the oven.

Stephanie Friedman’s story "Exposure" (originally published in Michigan Quarterly Review 52:1) was listed among the "Notables" for the year in the 2014 volume of Best American Short Stories. Her work has also appeared online at Hunger Mountain, Literary Mama, Blood Orange Review, and in RiverTeeth's "Beautiful Things" series, and is forthcoming in The Portland Review. She holds an MFA in Writing from Vermont College of Fine Arts and an MA in English Language and Literature from the University of Chicago.