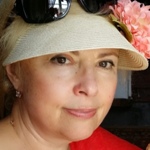 Gina (Eugenia) Budman emigrated to Denver, Colorado from Belarus at the age of 22. When she arrived in the United States, Gina didn't know a word of English, and had very little understanding of the free world. The year was 1980, the Cold War was in full swing, and the average mid-westerner has never met a Jew from the Soviet Union.  Budman lives now in a suburb of San Francisco with her family, and is a successful biotechnology professional. Gina began writing at the age of 53. She had a weekly column in a local newspaper; her essay was included in HIAS’ “My Story” collection, and she is a three-time winner of the yearly San Mateo Literary Arts contest.