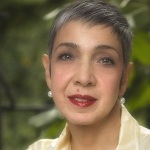 Rose walked toward the open doorway where Fatima now stood. Without smiling, Fatima untucked the corner of the packet she held and offered it to Rose. Nestled inside were six perfectly shaped, ripe figs. Their dark, striated skins seemed ready to burst and even their pliant stems looked edible. Rose took one and lifted her gaze so she could thank Fatima. But the doorway was empty. Fatima was already gone.

Yona Zeldis McDonough was born in Hadera, Israel and raised in Brooklyn, NY.  She was educated at Vassar College and Columbia University, and is the author of six novels, with a seventh, The House on Primrose Pond, due out from New American Library in February, 2016. In addition, she is the award-winning author of twenty-six books for children and has edited two essay collections. Her work has appeared in many literary and national publications, and she is the Fiction Editor of Lilith Magazine. “The Fig Tree” is one of a collection of inter-related stories, several of which are set in Israel.