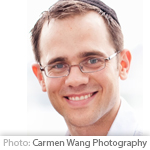 Chaya leaned forward and kissed Rabbi Goldstein as she slowly tightened her fist around the nail. She drew her head back from his and looked deeply into his eyes. She took a deep breath and collected her energy. Then Chaya plunged the nail into Rabbi Goldstein’s temple. Into the hand of a woman, Chaya thought, will the Lord deliver Sisera.

Joshua Van De Riet is a recently minted attorney. He lives with his wife and two children in Silver Spring, Maryland. “The Choice” is his first published work of fiction and he hopes to continue writing about Jewish society and religion.