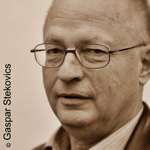 Translated from Hungarian by Tim Wilkinson

Born in 1946 in Budapest, award-winning dramatist, novelist, and translator György Spiró has earned a reputation as one of postwar Hungary’s most prominent and prolific literary figures. He teaches at ELTE University of Budapest, where he specializes in Slavic literatures.