The Tale of A Black Man 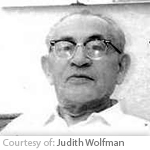 The Tale of A Black Man

Stephen Katz (the translator) teaches Hebrew Literature at Indiana University. His interest is the fiction of S.Y. Agnon and American Hebrew literature, the subject of his last book, Red, Black, and Jew (2009). He translated Avshalom Kaveh’s “Quince” and Yona Bachur’s “The Doll,” in Zeek (spring 2010 and February 2008); and “So Miriam Spoke of Moses,” by E. E. Lisitzky, in CCAR Journal (fall 2008). His translation of Avshalom Kaveh’s story “Haunted by God” appeared in the summer, 2013 issue of Jewish Fiction .net. He is currently completing an article on Yoram Kaniuk’s American stories and is continuing his research on early literary responses to the Holocaust.