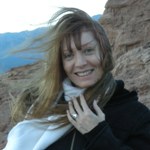 Argentine writer María Gabriela Mizraje, a graduate with honors from the Universidad de Buenos Aires, is a literary critic and philologist, and presently a professor and researcher with the Institute of Parliamentary Training for the Congress of the Argentine Nation. Among her books and critical editions are Argentinas de Rosas a Perón; Nora Lange. Infancia y sueños de walkiria; Mariquita Sánchez: Intimidad y política; Eduarda Mansilla: Pablo o la vida en las Pampas; Lorenzo Stanchina: Tanka Charowa, etc. She was director of the academic journal Sambatión: Estudios judíos desde Latinoamérica, she’s a member of the International Editorial Board of Noaj. Literary Review (a Jerusalem-based journal in Spanish and Portuguese), and her honors include the 2010 Gold Medal Argentina from the American Biographical Institute. She is an essayist, poet and storyteller. Her fiction in English translation has previously appeared in The Antigonish Review.