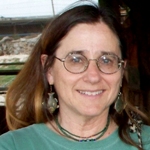 Judith Margolis is an Israel-based American artist, book designer and writer. She is the Art Editor of Nashim, Journal of Jewish Women’s Studies and Gender Issues. Her collages and artists’ books, combining images with text, have been published in books and magazines including ARTweek, Parabola, Sh’ma, Architectural Worlds, and CROSSCurrents. Her book Countdown to Perfection: Meditations on the Sefirot (www.brightideabooks.com) is in special collections, including at Yale and the New York Public Library. Her chapter about creative response to infirmity appears in Judaism and Health (Jewish Lights 2013). Current projects include Gazetteer (with essayist C.S. Giscombe); Lift Blade Plow (with anthropologist Mary Ann O’Donnell); and Women of the Book. Her work is archived at www.judithmargolis.com.