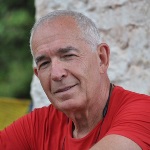 Translated from German by John Howard

Peter Sichrovsky is an Austrian journalist, author, and former politician. He was a foreign correspondent between 1986-1996 for publications including Stern Magazine, the Sueddeutsche Zeitung, and Profil. In 1989 he co-founded Austria's liberal newspaper Der Standard, where he served on the editorial board for several years, and from 1996-2004 was a member of the European Parliament. He is the author of eighteen books, including many acclaimed books based on interviews: Strangers in Their Own Land: Young Jews in Germany and Austria Today; Born Guilty: Children of Nazi Families (adapted into over fifteen foreign-language theatrical works); Incurably German – interviews with German neo-Nazis; and Abraham's Children: Israel’s Young Generation.