Egypt and the Desert 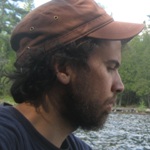 Egypt and the Desert

Every Thursday, Daniel walked the four blocks to Jacob’s narrow townhouse, crossing the small square of lawn in two steps. And every time, without fail, Jacob managed to open the front door seconds before Daniel knocked, as if he had been watching for him at the window. Once inside, Daniel would follow Jacob to the dining room table in the self-contained front of the house. There, under the light of two old brass lamps and the tutelage of the frustratingly focused Jacob, Daniel practiced the Hebrew alphabet, learned the musical notes of trope required to sing his Torah portion, and eventually learned the portion itself.

Aaron Kreuter currently resides in Toronto, where he spends his time writing, paddling and pursuing a PhD in English literature at York University. He has had work published in numerous journals, magazines and anthologies, including Best Canadian Poetry 2014, Vallum, Carte Blanche, FreeFall Magazine and SubTerrain, among other places. Arguments for Lawn Chairs, his first full-length book of poems, will be released by Guernica Editions in 2016.